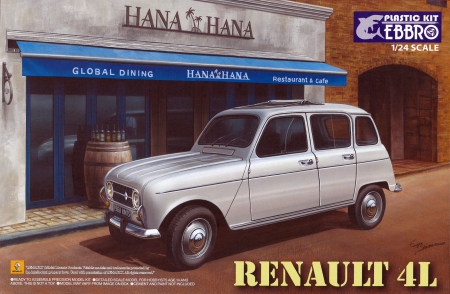 Fine detailed kit from EBBRO with more than 120 parts for the realization of the classic French car Renault 4L in the scale 1:24.
In addition, to this very high detailed kit in which the front doors and the tailgate can be designed to move, five realistic rubber tires, extra wheels, steering wheel and grille, as well as open and closed sunroof in order to build it in two different versions.
Furthermore, this kit still has a 13-part sheet with chromed stickers to design the mirror glass, the trim and the brand and type designations and a chromed photo etched part to represent the fine front grille.
On the decal sheet, there are 9 single decals like French and Japanese number plates, the RENAULT and the RENAULT 4 plate for an exhibition car.

Car  history:
The Renault 4 was designed and developed to complete with the Citroen 2CV, and debuted in the 1961 Paris Show. In contrast to Citroen who took much care in maintaining secrecy of their new 2CV prior to public unveiling, Renault opted to go public with their new car by organizing a promotional campaign before the grand opening of the Show. They ran a convoy made up of 200 Renault 4 at the Monthhery Autodrome located 24km south of Paris. Renault thoroughly studied the rival 2CV and incorporated the front-wheel-drive-system resulting in their first FWD car. The Renault 4 incorporated the same engine as the 4CV, and simply shifted it from the rear to the front end in order to save development costs. As a result of this new layout, the gear box was mounted at the front end, which required a linkage system similar to the one seen on the Citroen 2CV. The shift rod stemming from the gear box passes over the longitudinally mounted engine and into the driver's compartment through the dashboard. The bodywork was much taller and larger than the 4CV. It was fitted with flat glazing just like the 2CV. The front door windows can be slid open half way, while early models had fixed rear door windows. The car features a full opening tail gate and sizeable luggage compartment. The overall exterior design, although not as unique as the Citroen 2CV, has a functionally, attractive and softly contoured panel line that made it conventional and ageless throughout the generations. The production of the Renault 4 spanned for more than 31 years in France only, and further more in neighboring countries. It is claimed that the total production volume exceeded 8 million units, and the Renault 4 reigns as the best selling French car till this day.