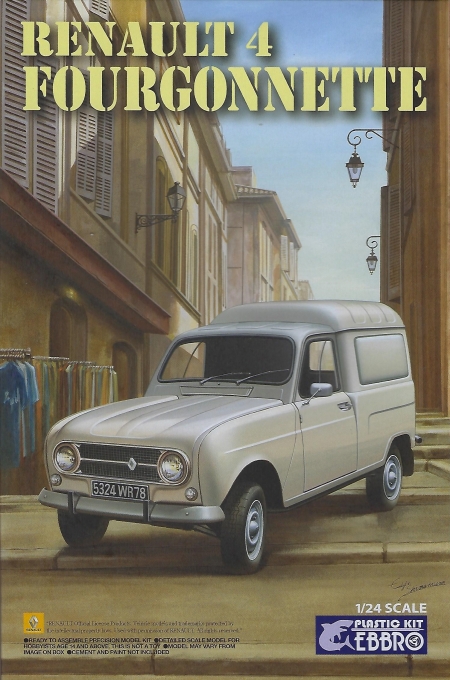 Fine detailed kit from EBBRO with more than 120 parts for the realization of the classic French car Renault 4 Fourgonnette/Van in the scale 1:24.
In addition, to this very high detailed kit in which the front doors and the tailgates can be designed to move, five realistic rubber tires, extra wheels, steering wheel and grille in order to build it in two different versions.
Furthermore, this kit still has a 17-part decal sheet for the realistic design of this vehicle with logos, lettering, markings and companies labels as well as a chromed photo etch part to represent the fine front grille.
The kit is rounded by a sheet of cardboard on which are six finished printed boxes to cut out, folded and can be used as load for the Renault 4 Fourgonnette.

Car  history:
The Renault auto company, upon launching their new Renault 4, organized the „Take the Wheel“ campaign throughout Paris. On the grand opening day of the 1961 Paris Motor Show, Renault rallied two-hundred samples of the new car into the heart of the city. They let the people drive any one of the cars as long as they wanted, and allowed them to park it anywhere in the city at their disposal.
This unprecedented campaign demonstrated Renault’s strong passion and hope for the new model Renault 4. Until then, Renault’s post-war achievement included the compact rear engine car 4CV and then the Dauphine. The rear-engine layout had ist advantages and was a popular trend back in the 1950 – 1960s. Renowned models like the VW Beetle, Fiat500/600, Hillman Imp and even the Chevrolet Corvair were all driven by rear-mounted power plants.
However, the rear-engine layout also had its shortcomings: One of the biggest set back was the limited luggage capacity, which hindered the development of the station wagon design.
Renault made a bold decision to incorporate the front-engine, front-wheel-drive system on their new generation compact cars resulting in the Renault 4 passenger car. Two years prior to release of the Renault 4, their commercial van the Estafette had already incorporated this layout to maximize cargo load capacity. French light commercial vans had the tradition of incorporating the FWD system even before the war. Citroen made a small number of TUB ( Traction Utilitaire Basse ) utilizing the engine/drive train from their Traction Avant and later developed it into the Type H van. Right after the war, Chenard & Walcker started to produce the CPV, which was later acquired by Peugeot and dubbed D3/D4 in 1951. The FWD system was an ideal platform for commercial vans it provided a low and flat loading floor to accommodate cargos.
The bodywork of the Renault 4 featured a tall station wagon layout never possible during the rear-engine era. The five door hatch-back body style offered a large luggage space easily accessible through the fully opening tail gate. Shortly after the introduction of the Renault 4, a „Fourgonnette“ model was added. This would be a direct competitor to the Citroen 2CV Fourgonnette. The front half of the bodywork is common with the standard passenger car, while the rear half is fabricated into a taller and vast cargo compartment. The four corners of the high roof were softly contoured creating a friendly atmosphere suitable for flower deliveries and milkmen.
The Fourgonnette soon became an important member of the Renault 4 family. The sizeable cargo space and lovable styling made it a popular daily use commercial van. Extended body models and side panels with or without windows were further offered dependant on customer requirements.
The Renault 4 evolved into the Renault 5, and as the generations passed by, the name Fourgonnette was retired, but its concept and spirit was succeeded by the Express and Kangoo, which has now become a symbol of nimble and indispensable commercial van.