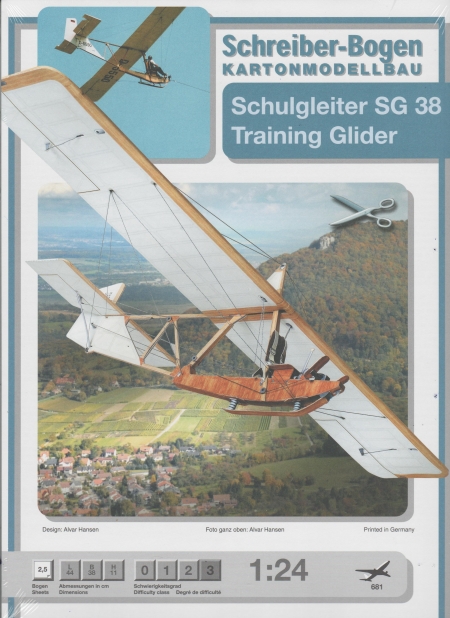 Schreiber cardboard model kit for the realization of the Training Glider in the scale 1:24
Number of sheets: 2,5
Dimensions of the build model:
Length: 44cm
Width: 38cm
Height: 11cm
Level: 3

The training glider SG 38 was developed in the aircraft factory Schneider in Grunau (near the present Jelenia Góra in Poland) in 1938. The abbreviation therefore does not stand for "Schul-Gleiter" (training glider), but for "Schneider, Grunau".
Because of its robustness, the SG 38 was at that time particularly suitable for the kind of training usual at that time and during the 1940s it was mainly used for flight training. Soon the production of this model of aircraft was widespread in many countries. With almost 9,000 being produced, no other glider was built more often. In the former GDR alone, where the SG 38 was in operation until about 1960, 420 gliders were built. With constructions from other countries there were small variations: for example with the English version, which was also known as the "Grasshopper", there were changes on the wings and tail unit.
The fuselage of the training glider SG 38 was built from wood in the timber-frame method and cross braced with steel wire. The outer lining was also made of wood. Depending on the model, the aircraft was about 6 metres long and about 2 metres high and had a wingspan of 10 metres. This construction weighed about 120 to 130 kg empty and reached a speed of 40 to 115 km/h.