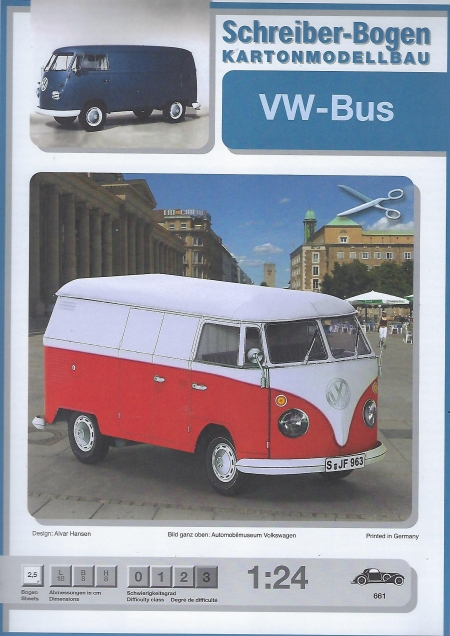 Schreiber cardboard model kit for the realization of a VW - Bus in the scale 1:24

Volkswagen has made a name for itself with the VW bus which is unequalled in the field of transporters, vans and minibuses. Those who now speak of a VW bus usually mean a small commercial vehicle regardless of the make.
The construction goes back to the time just after the Second World War. The Dutch importer then had the idea of building a manoeverable but roomy van on the basis of the VW Beetle. Like all VW models at that time, it had a rear engine. Even at that time the bodywork was tested in the wind tunnel for a low air resistance, which was amazing for a transporter.
But the construction also had a small oddity: the VW bus of the 60s was the only transporter with a built-in shower! The drivers described how, when it rained, water collected in the ventilation system. As it was situated on the roof, when it was switched on, a gush of water came down on the driver.
The production was started in 1950 as a van, like the cardboard model. At a price of DM 5,850 (EUR 2,991.-) it wasn’t much more expensive than a VW Beetle, so that one could reckon with good sales. Further versions soon followed: a bus with windows and up to nine seats, platform truck with tarpaulin, a special version e.g. for the transportation of the sick, etc. The engine from the VW Beetle originally had 25 h.p. and a top speed of 90 km per hour, using about 10 l. of petrol in 100 km. Up to the completely revised version of the VW bus in 1967 its performance rose to 44 h.p. with a top speed of 105 km per hour, but its consumption unfortunately also rose to 11.5 l. in 100 km.
Its spaciousness is astonishing. Although the VW bus is no longer than a middle-class car, with a length of 4.20 m it has a payload area of 4 sq.m.