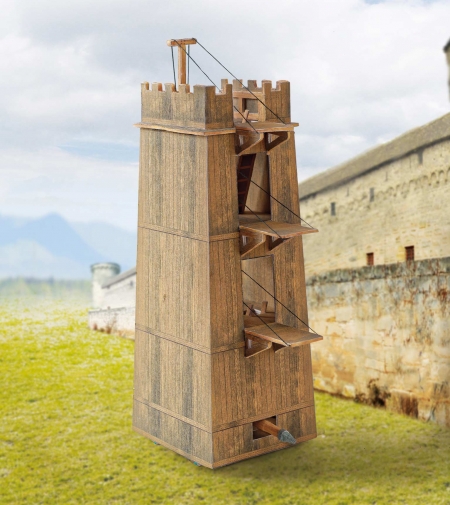 Schreiber cardboard model kit for the realization of a Roman Siege Tower in the scale 1:87

A siege tower was very common in ancient times. It was already used by the Assyrians for sieges and conquests. The Persians adopted this method of attack, and soon also the Greeks made use of it. In ancient Rome siege towers were used from the 2nd century B.C. The Romans built their first towers based on the Greek constructions.
Siege towers were equipped in different ways. This model shows the typical features. The tower was constructed on six to eight wheels so that it could be pushed as closely as possible to the walls of the besieged cities. So that the siege towers could be moved towards the walls, the area was either levelled off or ramps were built. In the lower part of the tower a battering ram was installed with which the walls could be knocked down. Above that there were one or more levels from where the soldiers could cross over the walls of the besieged town with the help of a drawbridge. Archers were able to attack the guards along the wall from the uppermost platform. The towers which were built of wood were often covered with a fireproof material in order to protect the tower and the soldiers inside it from attacks with incendiary devices. Some towers were even armoured with iron plates. However, as these towers were then more difficult to move because of their weight and sometimes even collapsed, this form of armouring was soon done away with.
During Caesar’s time there were siege towers with up to ten levels. At the destruction of Jerusalem in the year 70 AD, the Romans used a tower that is said to have been over 22 metres high. The largest Roman siege tower was in use in the year 73 AD during the storming of the Jewish fortress Masada. Due to the height of the walls, for this attack the Romans had to build a tower which had a height of more than 26 meters.
Some towers were covered with animal skins in order to take the brunt of the enemy arrows. As many of the besieged raised their walls during the siege in order to avoid the attacks with the drawbridges, it is said that there was another special construction. Apparently the Romans equipped some towers with platforms that could be adjusted in height and which could be operated by pulleys. Unfortunately there are no sources to prove the existence of such towers.