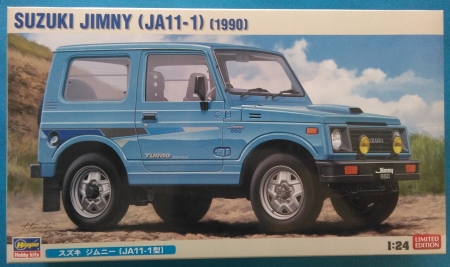 "To navigate rough forest paths, to traverse mud and rubble, to go where no automobile has gone before...". In April 1970, that was the dream of a team of engineers who created an astonishing light vehicle with off-road capabilities that could do just those things: the Suzuki Jimny.

Suzuki made its initial foray into an off-road market otherwise dominated by large capacity engine-powered vehicles with its first generation Jimny, the LJ10. Although small in size, its leight weigth combined with its powerful acceleration made it capable of navigating slopes of up to 27,5 degrees - performance that none of its competitors came close to matching. The ladder type chassis around with the Jimny's design was based was employed to improve its performance on rough terrain, and the vehicle was equipped with reliable leaf rigid suspension, front and rear. The drive system consisted of large diameter 16-inch tires driven by a two-stage high/low speed change auxiliary transmission; this gave the Jimny excellent handling and maneuverability on steep slopes, over bad roads and rough terrain, and in snowy conditions. While on one hand the vehicle was perfectly suited for - and soon won a reputation as an indispensible tool among - professionals working in heavily forested and/or montainous areas such as construction workers, surveyors, forest personnel, and transport drivers, it was also a genuine 4-wheel drive vehicle ideally suited for recreational use, and it won great praise as such from the general public. As the first light vehicle equipped with 16-inch diameter tires and 4-wheel drive, the Suzuki Jimny wrote a new page in Japanese 4WD history.

The Jimny JA11, which went on sale in February 1990, followed trends in light vehicle design of the time by being fitted with a more powerful 660cc engine and having both its front and rear bumpers lenthened. Increased engine and body size gave it hard-torquing performance combined with well-balanced styling. The newly designed engine block and extended cylinder stroke increased engine output, giving the JA11 superb handling characteristics at low and middle gear speeds. This combination has won the JA11 the reputation among motor vans as being the greatest Jimny of them all. The JA11 saw the inclusion in its design and construction of many features and upgrades that had long been desired by customers in its various models. Examples included: the JA11 Model 3 featured power steering, the Model 4 was given a 3-speed automatic transmission, and the Model 5 saw an increase of maximum power output from 55ps to 64ps. The traditional SUS layout leaf rigid suspension was also upgraded to give driver and passengers a great ride.