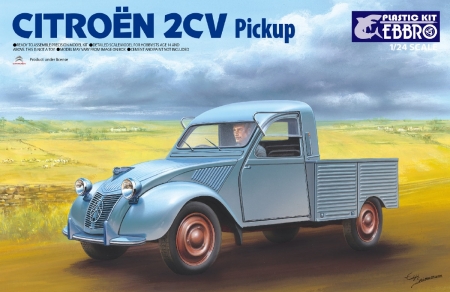 Citroen started to have their subsidiaries as early as 1926 only seven years after their Paris factory had first produced Citroen cars. These factories in England, Belgium, Germany and Italy all started assemble Citroen cars from that year. In those days high rate of import tax is common to European countries, and Citroen preferred to avoid it. France more suitable for local traffic system (right hand drive for England) and people's taste. For instance 2CV were produced in some factories after the Levallois, Paris, stopped it in February 1988. The end of 2CV production was 27 July 1990 in Portugal. Among those subsidiaries Citroen Cars Ltd. in England is most successful at the years of Traction Avan. The factory was located in Slough twenty miles west of central London. They produced right hand version of Citroen and these RHD cars had exported to various British Commonwealth countries like South Africa, New Zealand, etc.
The 2CV pick-up is originated by Slough. They had 2CV "Fourgonnette" van version for commercial and country use in France.
In England some of the besz selling models have pick-up variations.
Citroen Cars Ltd. in Slough modified 2CV Fourgonnette into üick-up. They removed upper half of its cargo room and put rear panel to its cabin. The lower half of cargo room with corrugated side panels which holdes spare tire to its left and fuel tank to right are basically same as Fourgonnette. And 2CV pick-up have enough potential for off road car with its light weight, soft suspension, good road clearance and versatitlity.
The Slough made 2CV had bonnet mascot saying "Citroen front wheel drive" on it. Fleet Air Arm never touched this mascot and it is visible on contemporary photos. It is against to savging weight but is clearly shows "Made in Britain".