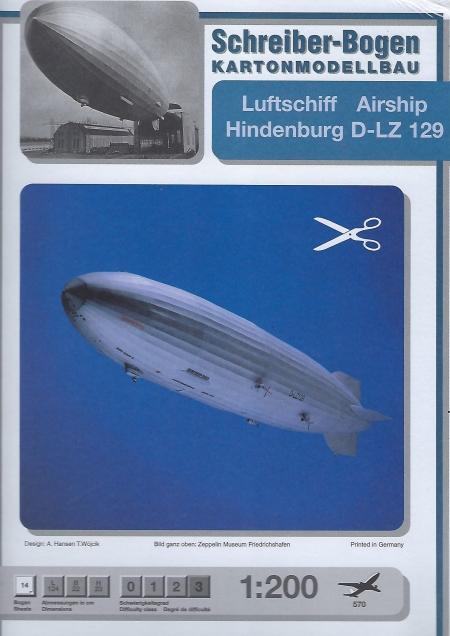 In autumn 1931 the Zeppelin airship Company started to built the airship LZ 129, which was given the name “Hindenburg” in honour of the president of Germany, Field Marshal Paul von Hindenburg. The “Hindenburg” was meant to relieve the airship “Graf Zeppelin” which was no longer able to cope with the passenger and freight traffic alone.
After four years of construction the LZ 129 was completed and in March 1936 made its first test voyage over Lake Constance. The “Hindenburg” was the largest airship that had ever been built and proved to be a considerable development in airship construction. With a length of 245 metres it was only 8.4 metres longer than “Graf Zeppelin”, but with a fuselage diameter of 41.1 metres and about 200,000 cubic metres it contained almost twice the amount of gas as that of the older ship. Instead of the highly inflammable hydrogen gas, the LZ 129 was to be filled with the non-inflammable but very expensive helium which was only avaiable from the USA in large amounts. However, for political reasons the USA refused to supply the gas. Hitler had become too powerful and already at that time a war in Europe was to be feared.
The “Hindenburg” was used mainly as a passenger ship for crossing the Atlantic to North America. The trip in the smoothly-gliding giant from Germany to the USA lasted about 65 hours, the return journey about 52 hours. The airship had a capacity of 50 passengers, who experienced journey in perfect luxury. The cabins were comfortable, functional and quiet. The lounge, study, dining-room, lobby with observation windows and smokers’ lounge were more comfortable furnished than in any other airship. The crew of the airship consisted of 50 to 60 men. whom 10 to 15 were responsible for the well-being of the passengers. The “Hindenburg” was used for 63 journeys.
On May 6,1937 it came to a catastrophe on the airport of Lakehurst. Just before the landing, which had to be cancelled serveral times because of the bad weather, the airship caught fire and burned out within just 32 seconds. The sad outcome of the accident was 36 people killed – 13 passengers, 22 crew members and one member of the ground crew. After this accident the service of the “Graf Zeppelin” was stopped as well; the end of the German airships had begun.