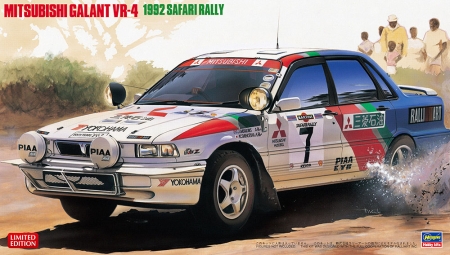 Kenjiro Shinozuka became the first Japanese driver to win a round of World Rally Championship – claiming victory for Mitsubishi in West Africa’s Ivory Coast Rally 1991. „Lightning Kenjiro“ and co-driver John Meadows led home 1-2 result for Mitsubish’s four-wheel-drive Galant VR-4, after starting eighth. After his history-making win he set his sights on a new target for 1992-Kenya’s Safari Rally, rated the toughest rally in the world. With a Galant VR-4 entered by Team Mitsubishi Ralliart and run by Tusk Engineering’s Japanese and English crew, Shinozuka and Meadows again started eighth – but this time ran into a series of problems in the early stages of the East African classic event and dropped back to 24th place. Despite having to cope with thick dust and encountering more problems in the final leg of the Safari, Shinozuka made a dramatic comeback to finish a fine 10th.
Length of the built model: 200mm
Width of the built model: 81mm