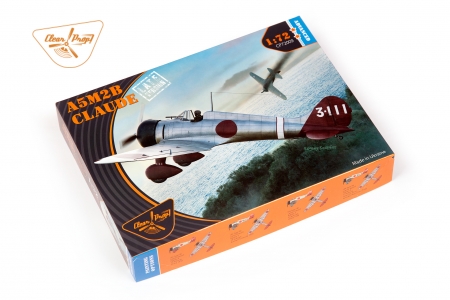 The Mitsubishi A5M, formal Japanese Navy designation Mitsubishi Navy Type 96 carrier-based Fighter, experimental Navy designation Mitsubishi Navy Experimental 9-Shi Carrier Fighter, company designation Mitsubishi Ka-14, was a Japanese carrier-based fighter aircraft. It was the world’s first monoplane shipboard fighter to enter service and the direct predecessor of the famous Mitsubishi A6M „Zero“. The Allied reporting name was Claude.
In 1934, the Imperial Japanese Navy prepared a specification for an advanced fighter, requiring a maximum speed of 350km/h at 3.000m and able to climb to 5.000m in 6,5 minutes. This 9-Shi (1934) specification produced designs from both Mitsubishi and Nakajima.
Mitsubishi assigned the task of designing the new fighter to a team led by Jiro Horikoshi. The resulting design, designated Ka-14 by Mitsubishi, was an all-metal low-wing fighter. The first prototype, powered by a 600hp Nakajima Kotobuki 5 radial engine, flwe on 4 February 1935. The aircraft far exceeded the requirements of the specification, with a maximum speed of 450km/h being reached. The second prototype was fitted with a revised, ungulled wing, and was ordered into production as the A5M.
This box contains an unassembled plastic model kit.
Length of the built model: 105mm
Wingspan of the built model: 153mm
Plastic parts - 84
Photoetched parts - 41

This kit is designed for advanced modellers and includes five sprues, one of which is clear, set of photoetched parts, masks, special film for the dashboard dials and decal. This kit help you to improve the final result - to create a copy of this aircraft that will repeat the original as much as possible.
Markings are provided for four different schemes and a colored and detailed assembly manual complete this aircraft model kit.