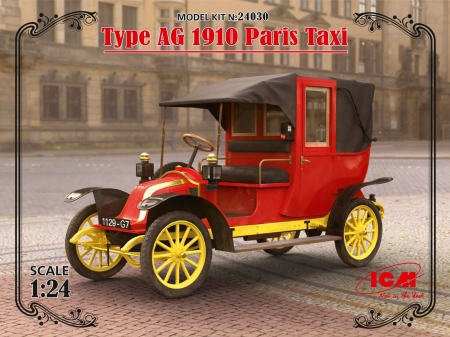 Renault AG1 car was appeared in 1907. Due to the strength and reliability of these cars in 1908-1914 it became the most popular Parisian taxi (more than 2000 pieces). On September 5th and 6th, 1914, 1300 Parisian Renault AG1 were used by the French Army to transport 6000 soldiers from Paris to the Battle of the Marne, where the French troops stopped the German offensive. Parisian taxis „Renault“ began to be called „Taxi de la Marne“, and the French said:“Taxi saved Paris“.
This box contains an unassembled plastic model kit. Length 155mm, height 89mm, includes 108 parts. Cement and paint needed to finish model as shown are not included. Instruction sheet with drawings and decal sheet are included.