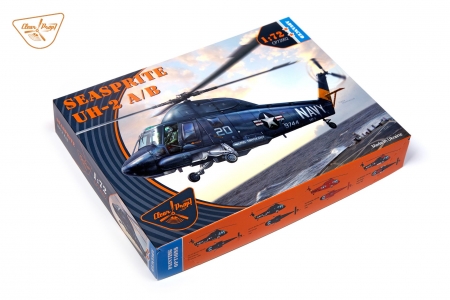 The Kaman SH-2 Seasprite is a ship-based helicopter originally developed and produced by American manufacturer Kaman Aircraft Corporation. It has been typically used as a compact and fast-moving rotorcraft for utility missions.
During 1962, the initial UH-2 model commenced its operational service with the U.S.Navy. The U.S. Navy quickly determined that the helicopter’s capabilities were greatly restricted by its single engine. Thus the service ordered Kaman to retrofit all of its Seasprites into a more capable twin-engine arragnement instead. When furnished with a pair of engines, the Seasprite was capable of attaining an airspeed of 130 knots and operating at a range of up to 411 nautic miles. The U.S. Navy would operate a total fleet of nearly 200 Seasprites to perform a variety of missions, ranging from anti-submarine warfare (ASW) operations, search and rescue (SAR) and utility transport. Under typical operational conditions, several UH-2s would be deployed upon each of the U.S. Navy’s aircraft carriers in order to perform plane guard and SAR missions.
During the 1970s, the conversion of UH-2s to the SH-2 anti-submarine configuration provided the U.S. Navy with its first dedicated ASW helicopter capable of operating from vessels other than its aircraft carriers. The compact size of the SH-2 allowed the type to be operated from flight decks that were too small for the majority of helicopters. This factor would later play a role in the U.S. Navy’s decision to acquire the improved SH-2 during the early 1980s.
This box contains an unassembled plastic model kit.
Length of the built model: 223mm
Rotor diameter of the built model: 123mm
Plastic parts - 92
Photoetched parts - 68