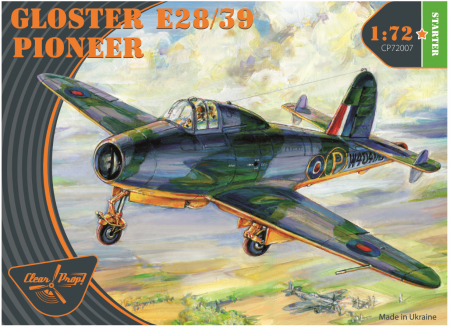 The Gloster E28/39, (also referred to as the Gloster Whittle, Gloster Pioneer or Gloster G.40) was the first British jet-engined aircraft and first flew in 1941. It was the third jet to fly after the German Heinkel He 178 (1939) and the Italian Caproni Campini N.1 motorjet (1940).
The E28/39 was the product of a specification which had been issued by the Air Ministry for a suitable aircraft to test the novel jet propulsion designs that Frank Whittle had been developing during the 1930s. Gloster and the company’s chief designer, George Carter, worked with Whittle to develop an otherwise conventional aircraft fitted with a Power Jets W.1 turbojet engine. Flying for the first time on 15 May 1941, a pair of E28/39 aircraft were produced for the flight test programme. Following initial satisfactory reports, this aircraft continued to be flown to test increasingly refined engine designs and new aerodynamic features.
The E28/39 contributed valuable initial experience with the new type of propulsion and led the development of the Gloster Meteor, the first operational jet fighter to enter service with the Allies.
This box contains an unassembled plastic model kit.
Length of the built model: 107mm
Wingspan of the built model: 123mm
Plastic parts - 74
Photoetched parts - 12

Easy-to-assemble kit that is suitable for both beginners and advanced modelers and includes set of plastic parts for the assembly of one model of the aircraft (four sprues, one of which is clear), set of photoetched parts and decal.
Markings are provided for four different schemes.
Colored and detailed assembly guide will make the assembly process easy and enjoyable. And the box will serve as an excellent organizer which will be handy during assembly process.