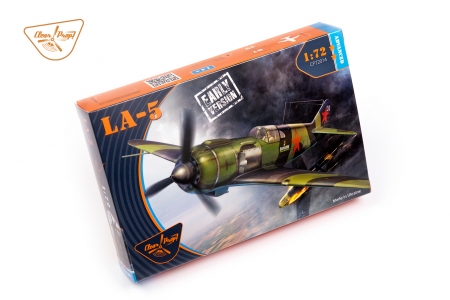 The Lavochkin La-5 was a Soviet fighter aircraft of World War II. It was a development and refinement of the LaGG-3, replacing the earlier model’s inline engine with the much more powerful Shvetsov Ash-82 radial engine. During its time in service, it was one of the Soviet Air Force’s most capable types of warplane, able to fight German designs of an equal footing.
The La-5’s heritage began even before the outbreak of war, with the LaGG-1, a promising yet under-powered aircraft. The LaGG-3 was an modification of that design that attempted to correct this by both lightening the airframe and fitting a more powerful engine. Nevertheless, this was not enough and the lack of power remained a significant problem.
When the prototype took flight in March, the result was surprisingly pleasing – the fighter finally had a powerplant that allowed it to perform as well in the air as it had been supposed to on paper. After flying, the LaG-5 (the change in the name reflecting that one of the original LaGG designer, Mikhail I. Gudkov, was no longer with the programme), Air Force test pilots declared it superior to the Yak-7 and intensive flight test began in April.
Further refinement of the aircraft involved cutting down the rear fuselage to give the pilot better visibility, making this version the La-5F. Later, a fuel-injected engine, a different engine air intake and further lightening of the aircraft led to the designation La-5FN that would become the definitive version of the aircraft.
This box contains an unassembled plastic model kit.
Length of the built model: 107mm
Wingspan of the built model: 123mm
Plastic parts - 74
Photoetched parts - 12

This kit is designed for advanced modellers and includes four sprues, one of which is clear, set of photoetched parts and a decal sheet.
Markings are provided for three different schemes and a colored and detailed assembly guide will make the assembly process easy and enjoyable.