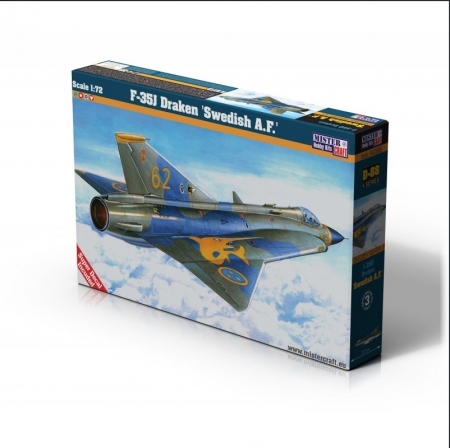 The Saab 35 Draken is a Swedish fighter aircraft developed and manufactured by Saab between 1955 and 1974. It was the first supersonic aircraft tob e deployed in Western Europe. The Draken was developed during the 1950s to replace Sweden’s first generation of jet-powered fighter aircraft, the Saab J 29 Tunnan and later the fighter variant (J 32B) of the Saab 32 Lansen. The J-35 Draken was produced in many versions:
Saab J 35A „Draken“
Fighter version, total production 90 including prototypes.[11] The J 35As were delivered between 1959 and 1961. The tail section was lengthened after the 66th aircraft to house a new afterburner for additional thrust, the longer tail cone unexpectedly reduced drag.[11] This forced the installation of a retractable tail-wheel.[11] The two versions were nicknamed Adam kort (Adam short) and Adam lång (Adam long). The Adam was fitted with a French Cyrano Radar (Swedish designation PS-02)[22] (same as on the Mirage III) as the Swedish radar hadn't been developed in time.
Saab J 35B „Draken“
Fighter version, built and delivered between 1962 and 1963, total production 73.[22] This variant had improved radar and gun sights, and was also fully integrated into the Swedish STRIL 60 system; a combat guidance and air surveillance system. Fitted with a Swedish built radar PS-03.[16]
Saab SK 35C „Draken“
25 J 35As with short tail sections rebuilt into a twin-seated trainer version.[11] The minor modification meant that the aircraft could easily be converted back to a J 35A standard if necessary. The trainer version lacked armament.
Saab J 35D „Draken“
Fighter version, delivered between 1963 and 1964, total production 120. The aircraft had a new and more powerful Rolls-Royce Avon 300 (RM6C),[22] which could deliver 77.3 kN thrust when using its afterburner. This was also the fastest Draken version, capable of accelerating until out of fuel. It was also the last Draken to carry two cannons. Fitted with the PS-03 radar.[22]
Saab S 35E „Draken“
Reconnaissance version, total production 60 with 32 built from scratch and the remainder converted from the J 35D model.[23] The armament[23] and radar was removed and several cameras (of ortho and oblique types) fitted. The aircraft was unarmed to make room for the nine cameras of Vinten design (five in the nose and four in the fuselage)[23] but was fitted with a countermeasure system to increase its survivability. It also carried an active infrared reconnaissance system of EG&G design in a pod fitted to a hardpoint.[23]
Saab J 35F „Draken“
Fighter version, delivered between 1965 and 1972, total production: 230.[24] This variant had improved electronics and avionics, e.g. integrated radar, aim and missile systems. The aircraft's main armament were IR and SARH versions of the Hughes Falcon missile originally intended for the J 35D, but one of the cannon was removed[19] to make space for more avionics. The J 35F2 was a J 35F, produced with a Hughes N71 Infrared search and track sensor. This was a change in the production line from the no. 35501 airframe. The Hawé mods I & II were carried out on the P/S-01/011 radar sets in the early 1980s to improve resistance to ECM.[25]
Saab J 35J „Draken“
In 1985 the Swedish government decided to modify 54 J 35F2s to the J 35J standard.[26] In 1987, 12 more modifications were ordered: between 1987 and 1991, the aircraft received a longer lifespan, modernized electronics and cannon, additional two Sidewinder (AIM-9P) pylons under the air intakes and increased external fuel capacity. The final operational J 35J flew for the last time in 1999.
Saab J 35Ö „Draken“
In the mid-1980s, Saab re-purchased 24 J 35D aircraft from the Swedish Air Force and converted them into the J 35Ö version (also called J 35OE in English literature) for export to Austria. Austria bought AIM-9P5 all aspect Sidewinders for these aircraft during the war in former Yugoslavia.