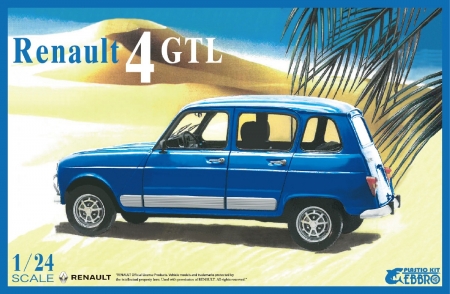 On September 9,1977, the total production of Renault 4 reached 5.000.000th at their Isle of Seguin factory. First produced in 1961, the Renault 4 is the car for the people of France (as an arch-rival of Citroen 2CV ) and have been the best selling model in every Renault products since then. And in 1978 Renault added one new version to Renault 4 family, "GTL". Through the years of Renault 4 production, seventeen years long, they had several of special versions in their history. One of those is the Parisienne in 1965 which was equipped two types of body prints: tartan-chech or rattan-work attracting the eyes of ladies who are keen to latest fashion. The Renault 4 GTL is generally an up-to-date and also up-graded version of long life model. Two years before Renault announced a new version to 5 family which is called "GTL". And Renault 4 GTL traced same way to it. To improve its performance, put larger capacity engine and make some modifications to its exterior. The Renault 4 GTL's 1108cc four cylinder engine is borrowed from the Renault 6 TL and made its top speed to 122km/h. It improved the performance of the Renault 4 good to Autoroute cruising and more suitable for modern traffic in late 1970's and 80's. Also Renault sprinkled some magic powder to its aged body with a few of modern tastes. The Renault 4 GTL is equipped with protector-panels to its body side which is similar to 5 GTL. Steel wheels are also changed to sporty ones. And one of its new special equipments is short pipe-bars set just outside of headlamps. Later it becomes 4 GTL's symbol and people called it as "goars's horn" (Cournes de Bouc in French). These two pipe-bars are preventing front equipments damages from French style parking habit. They say the idea of these guard pipes are came from La Poste vehicles which put it first before the Renault did it. The sales of the Renault 4 GTL had kept in good volume until its end at 1992. Total production number of the Renault 4 reached to 8.135.424. When one of the longest life model in the automobile history met its final day, their Isle of Seguin factory closed its door too.